Workers at all levels in our 2014 survey were sending employers a clear message.

If sustainable high performance is the goal, don’t seek to get more out of us. Rather, invest more in helping to meet our core needs, so we have the energy we need to tap our full potential. It was a radical value proposition then, and it remains true today in 2022: 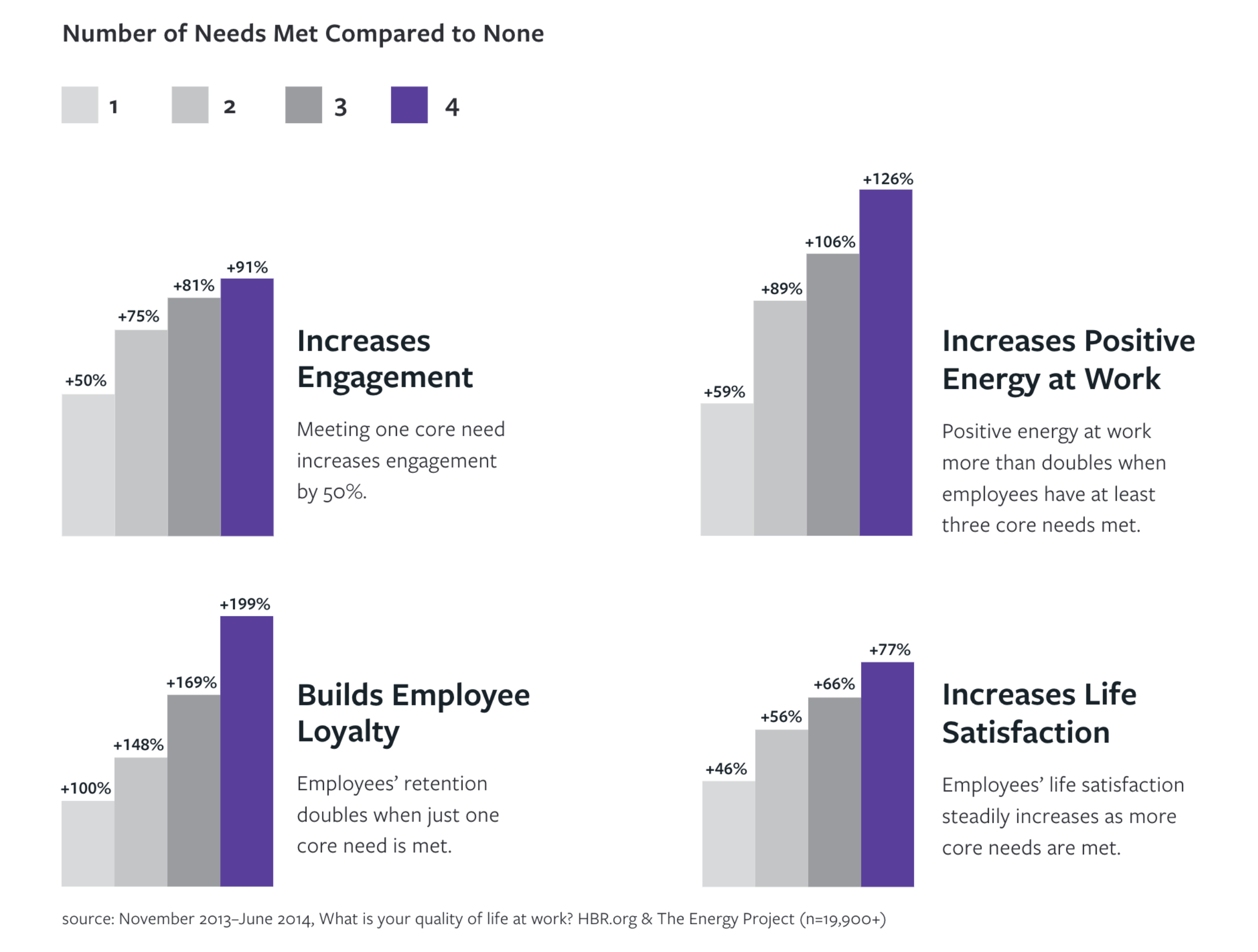 It’s a depressing but undeniable reality: the vast majority of employees feel depleted, diminished, disenfranchised, demoralized, and disengaged at work.

And it’s getting worse. In a world of relentlessly rising demand and complexity, the great unsolved puzzle of the modern workplace is how to tap into more of people’s potential so they can perform sustainably at their best.

Here’s the conundrum: how people perform is inextricably connected to how they feel, but interior life remains terra incognita in most companies. The unspoken expectation is that employees will set aside their needs in order to get their work done. We’ve valued people for what they can produce, but paid very little attention to what it takes to be sustainably productive.

Instead, for 200 years, since the dawn of the Industrial Age, the model for how to work has been the machine, and more recently, the computer. More, bigger, faster remains the prevailing mantra.

Machines are valued for their speed, efficiency, and predictability. They make no demands. When they break, they can be repaired or replaced. Computers run even faster and do more.

The assumption in organizations has been that people ought to be able to operate in the same way. The problem is we can’t.

Unlike machines, human beings are designed to pulse regularly between spending and renewing energy. While machines can run on one source of energy, people have four core energy needs: physical, emotional, mental, and spiritual.

In today’s knowledge-driven economy, the best measure of productivity is no longer how much time people invest. Rather, it’s how much energy they bring to whatever hours they work - and the value of the work they produce as a consequence.

The challenge for employers is to free, fuel, and inspire their employees to bring more of their potential to work every day. Paradoxically, getting more out of people depends first and foremost on investing more in them.

That’s the primary lesson The Energy Project team has learned in working with thousands of people, across dozens of companies, during the past decade. It’s also the overwhelming message from the nearly 20,000 people we surveyed during the past year about their experience in the modern workplace.

Findings from 2014's Quality of Life at Work Study with HBR

Originally published as a research publication in 2014.

In partnership with the Harvard Business Review, The Energy Project set out Fall 2013 to assess the factors that most influence how people feel at work, and how they perform as a result.

What emerged from The Quality of Life @ Work study of 20,000 employees in dozens of countries around the world is that they have four predictable core needs at work: physically, to rest and renew; emotionally, to feel cared for and valued; mentally, to be empowered to set boundaries and focus in an absorbed way; and spiritually, to find a sense of meaning and purpose in their work.

Since the dawn of capitalism, time for money has been the core value exchange between employees and their employers. It no longer serves either party well. Paying for people’s time is no guarantee you’ll also get their energy, engagement, focus, or passion. Conversely, no amount of money people get paid is sufficient to meet their core needs.

For much of the past two decades, the key factor associated with higher performance has been engagement. More than 200 studies have now confirmed a direct and powerful relationship between the level of employee engagement and company performance.

In its 2012 Global Workforce Study, Towers Watson found that companies with the lowest level of engagement had an average operating margin of 10%. Those with traditionally high engagement scores had a margin of 14%.

Engagement has traditionally been defined as “the willingness to expend discretionary effort on the job.” But willing, it turns out, is no longer a guarantee of able. With the increased demands created by technology and a more complex global economy, even the most engaged employees are running on empty.

The Towers Watson study found that “sustainably engaged” employees - those who have not only the willingness but also the physical, emotional, and social energy to invest that extra effort - have operating margins almost double those of traditionally engaged employees.

Our own research suggests that it’s equally critical to actively promote mental and spiritual well-being: 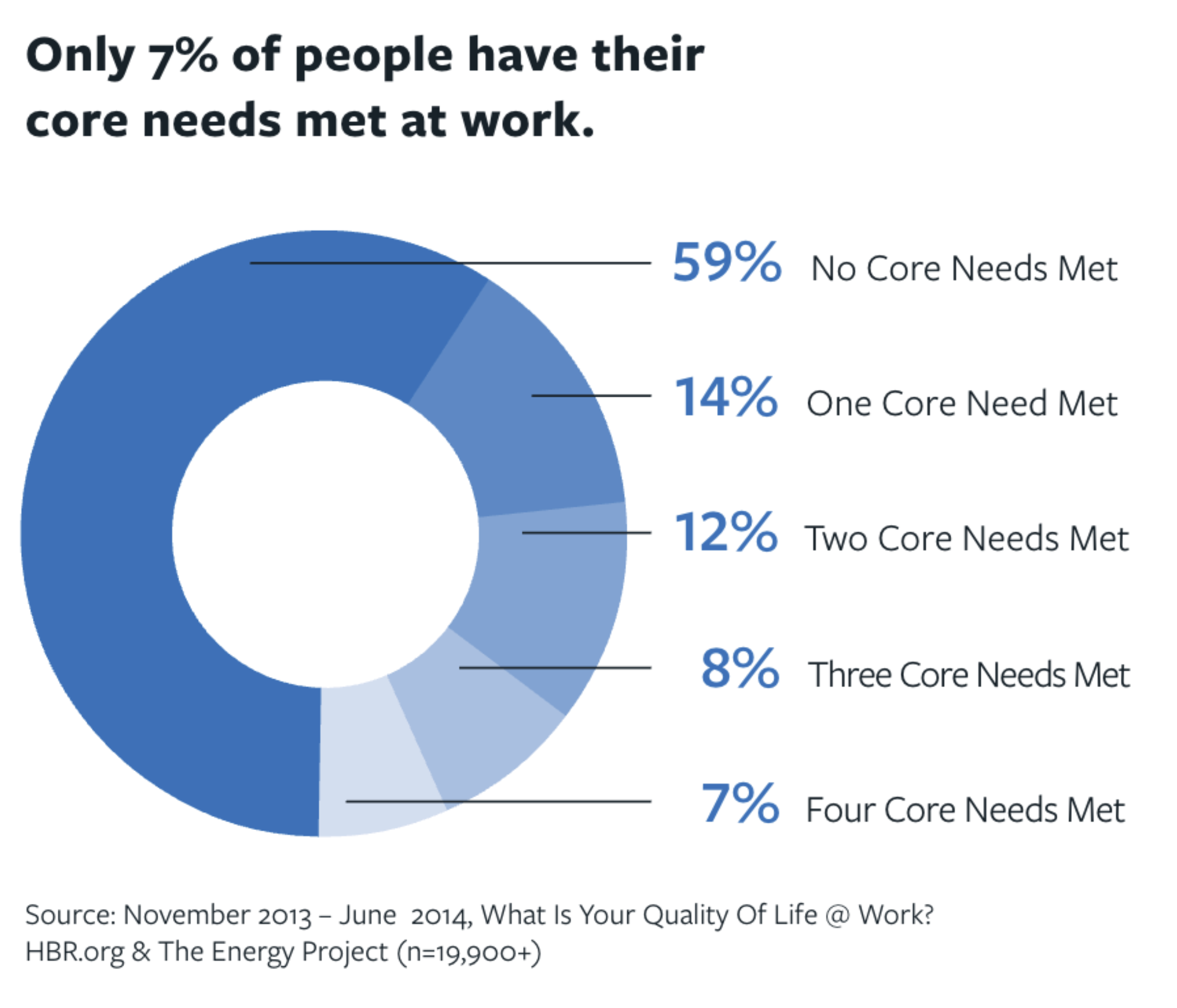 Physically, that means ensuring that team members effectively balance intense effort with real renewal, not only in the evenings, on the weekends, and during vacations, but also intermittently throughout the workday.

Emotionally, the charge to leaders is to truly care for those they lead – not just by regularly recognizing and appreciating them for their accomplishments, but also by holding their value while delivering critical feedback, and by believing in their capacity to exceed their own expectations.

Mentally, effective leaders create an environment in which employees are empowered to set clear priorities and firm boundaries, so they’re able to focus in an absorbed way on immediate, tactical work, to take sacrosanct time for creative and strategic thinking, and to work flexibly, in ways that best suit their needs.

Spiritually, the best leaders define a clear and compelling vision and a set of values that inspire team members – while serving themselves as role models who walk their talk.